WEST LEBANON, N.H. – Oct. 17, 2019 – Legacy ski brand Nordica today announced the debut of season one of “It’s Family Time”, a series of five short videos featuring skiing, families, and how the sport creates memories and bonds that last a lifetime.

Each episode in the series is told from a unique point of view, with the campaign appealing to a broad range of skiers from the once-a-year vacationer, to the weekend warrior, as well as the core skier who lives and breathes skiing. The inclusive and emotional campaign illustrates how skiing brings people and families together, becoming lifelong participants in the sport.

“Skiing was a huge part of our family when I was growing up,” said Sam Beck, Nordica North America’s director of marketing. “My wife and I are starting our own family now and are having a blast getting our kids into it. Dad is it almost winter? Dad can we go skiing? Dad where are my skis? From watching them stomp around the kitchen with their boots, to the first magic carpet ride, it brings joy to our lives. Not to mention the smiles it puts on the grandparents’ faces. Those are the feelings and memories ‘It’s Family Time’ intendeds to share.”

From the perspective of a teenage ski racer, “Race Life” illustrates the ski racing family, which is not just his parents, but also his coaches and his teammates as well as the other kids’ parents.

The second episode, “Mom Stoke”, tells the story of Brooke Froelich and how she balances the hectic life as a mom raising two kids and keeping them active in the winter.

The third episode, “Alpine Tradition”, shares a grandmother’s perspective reminiscing about raising her sons on skiing and then seeing them introduce their families to skiing.

“Breaking Barriers” features a 12-year-old Latino girl feeling isolated living in Jackson Hole, Wyoming because she does not ski. She joins Coombs Outdoors, learns to ski, falls in love with it, and eventually teaches her parents how to ski.

The final vignette, “Living A Dream”, is told from the point of view of a 12-year-old girl growing up in the Alps with pro skier parents, living and breathing skiing, working towards becoming a professional skier herself. 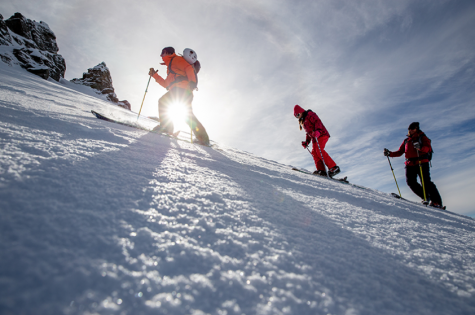