Warming up our brains for backcountry travel should be on the pre-season checklist next to squats and lunges. Close to two million skiers and snowboarders head into non-lift served backcountry each season, according to the 2015 SIA Snow Sports Market Intelligence Report.

Thirty fatalities that were caused by avalanches in the U.S. were tallied by the end of the 2015/2016 season: nearly triple the number of lives that were lost in the backcountry the year prior, reports the Colorado Avalanche Information Center. Last season, the number of fatalities dropped to 12 in the U.S.—which is still a dozen too many.

As out-of-bounds traffic booms, backcountry safety courses are evolving across the U.S. and retailers are getting more involved with avalanche education. To that point: I joined the Beginner Backcountry Ski Tour in Frisco and Vail, CO, the first weekend of December. The women’s-only program is one offered by Backcountry Babes, an outdoor school and guide company that provides classes and trips both internationally and across the country.

Our program’s students had all backcountry skied or splitboarded—and no one had completed an AIARE Level 1 certification: The scenario is not atypical.

“When I started backcountry skiing with friends I didn’t understand what was possible. I didn’t have avalanche awareness,” says Outdoor Education Instructor and Backcountry Babes Owner Emily Hargraves, who acquired the organization in 2014. The eye-opening moment for Hargraves was seeing the aftermath of an avalanche that buried a handful of cars on Colorado’s Berthoud Pass.

The single largest takeaway from the Beginner Backcountry Ski Tour was the importance of continued curiosity—in other words, gathering data to adjust decision-making throughout a backcountry tour—and continued education. The 1.5-day course is a precursor for AIARE Level 1 certification to help people gain experience in the backcountry, so that when those students take the Level 1 course they can focus on the safety material rather than floundering with their skins or heel risers.

Backcountry Babes was founded in 1997, by champion telemark skier Leslie Ross, to help improve the gap between the number of men and women involved in outdoor recreation: the organization is still fueled by demand. Most of the students in our class were inspired to pursue the backcountry due to the exhaustive lift lines and commuter traffic of their home resort, but nearly unanimously, students signed up for the course to learn about backcountry travel from women while being surrounded by women. 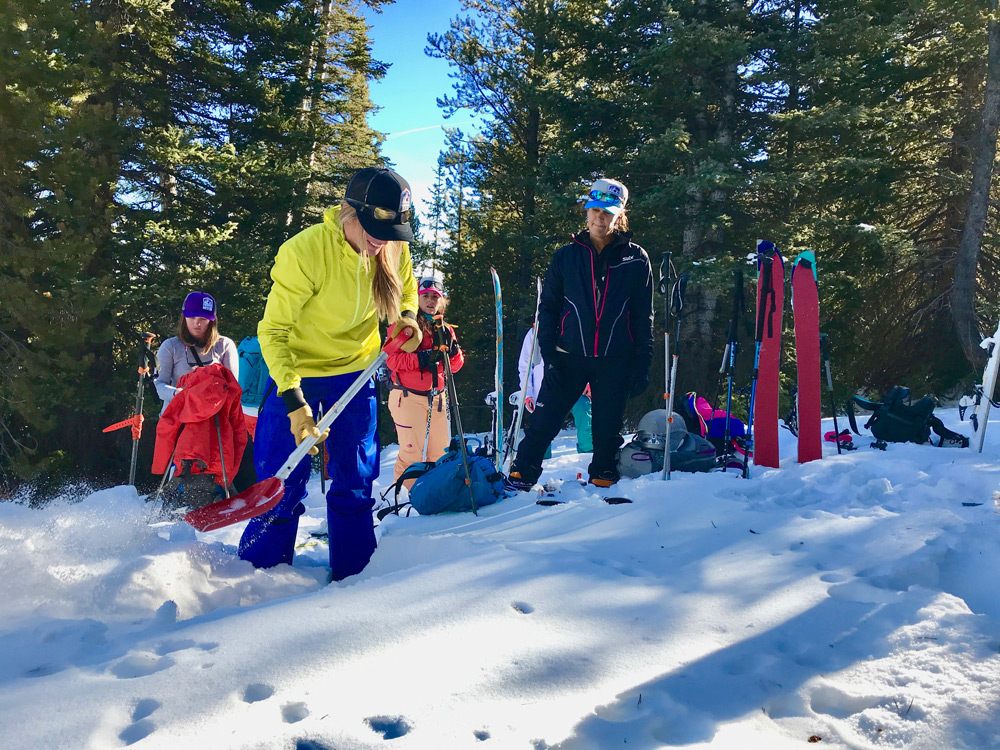 Nonetheless, Wren focused on growing the shop’s involvement in the expanding sport. “We are a small, locally owned company. Our way to stand out in the market is to be really community-based, and avalanche education is really important to our local mountain community,” she says. In addition to developing courses with Backcountry Babes Wren is seeking AIARE guide certification.

Splitboard sales at Underground Snowboards have grown a total of 138 percent from 2014/2015 to the beginning of the 2017/2018 season. In general, retailers across Colorado—The Boarding Haus in Durango, Snowmass Sports, Alpine Quest Sports in Edwards, and Christy Sports in Boulder—have seen an uptick in backcountry equipment sales, customer inquiries about backcountry gear and avalanche courses, and growth in uphill skinning at resorts. Furthermore, AT equipment sales increased to $34.2 million—5 percent overall—in both snow sports and outdoor channels in the 2014/2015 season, according to the most recent data provided in the 2015 SIA Snow Sports Market Intelligence Report.

To match the sport’s growth, Underground Snowboards organized four backcountry education courses including its first-ever coed class for the 2017/2018 season. “So many guys were coming into the shop and saying, ‘I want to do an avalanche course, too—when will you have a course that men can join?’”says Wren. Underground Snowboards’ coed AIARE Level 1 course in January 2018 is already almost full. Backcountry Babes also offers a handful of coed courses.

The easiest way for retailers to get involved with promoting avalanche awareness is to provide marketing materials to customers for the local companies that offer avalanche safety courses, Wren suggests. Retailers can organize staff trainings to go over how to ask customers about their backcountry knowledge and encourage customers to sign up for an avalanche training course. To incentivize customers, shops can partner with brands: For multiple seasons, Dakine donated a dozen backcountry backpacks to Underground Snowboards’ AIARE Level 1 course for women. 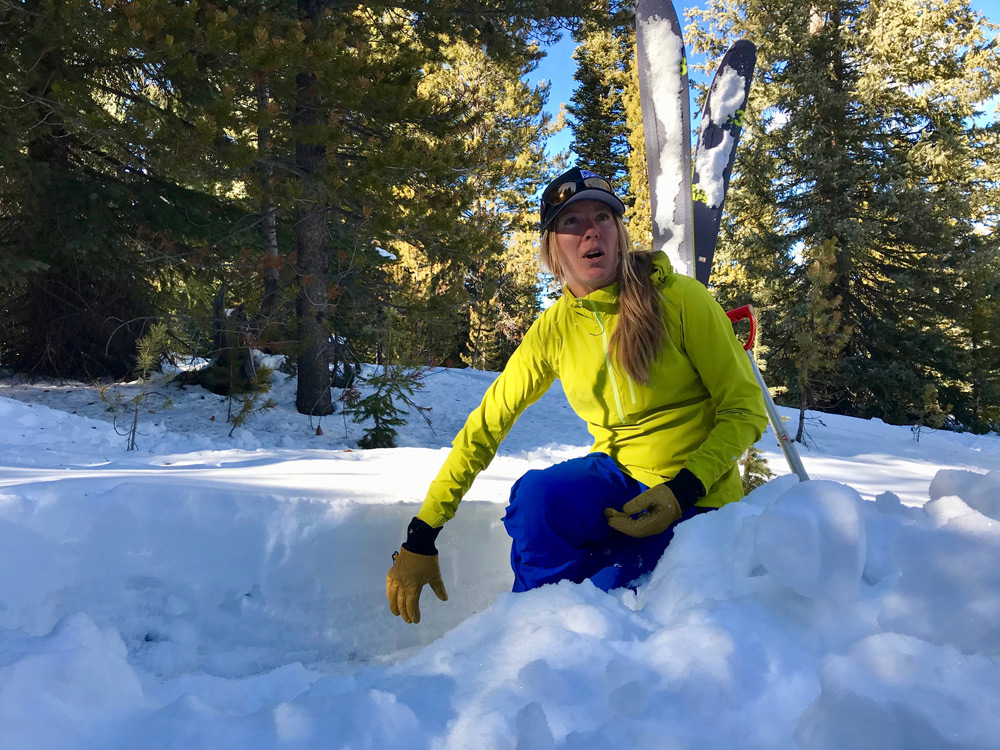 “You can never learn too much. Keep taking more classes. Start with AIARE’s recreational track and then move into the professional track,” says Irwin Guides Avalanche Forecaster and Guide Karin Pocock, who also guided our course on Vail Pass along with Backcountry Babes Instructor Kenzie Carson and Hargraves.The American Institute for Avalanche Research and Education (AIARE) facilitates the majority of the avalanche education curriculum that’s used by organizations across the U.S.

Starting in the 2017/2018 season, AIARE courses are separated into two education tracks for industry professionals and recreational students. With the AIARE course updates: Anyone with a career path in the avalanche industry—a guide, forecaster, instructor, researcher, etc—takes Pro 1 and Pro 2. Those who are not pursuing a leadership role can register for AIARE 1 and AIARE 2.

There are a few brand new course requirements, too. The AIARE Avalanche Rescue Course is a one-day stand alone class that’s a prerequisite for AIARE 2 and Pro 1 courses. For the professional track, anyone who completed AIARE 2 prior to winter 2017-18 needs to take the AIARE Pro 1 Bridge course, a two-day exam, and the Avalanche Rescue Course to qualify for enrollment in the Pro 2 course.

Not all courses in the U.S. are AIARE certified. AIARE was founded in the ‘90s with a mission to help unify the nation’s avalanche education curriculum. Historically, several organizations established independent avalanche curriculums and recommended guidelines, which led to course variations and regional diversity. In turn, the knowledge and experience levels across avalanche course providers and guide candidates is not always consistent or uniform. 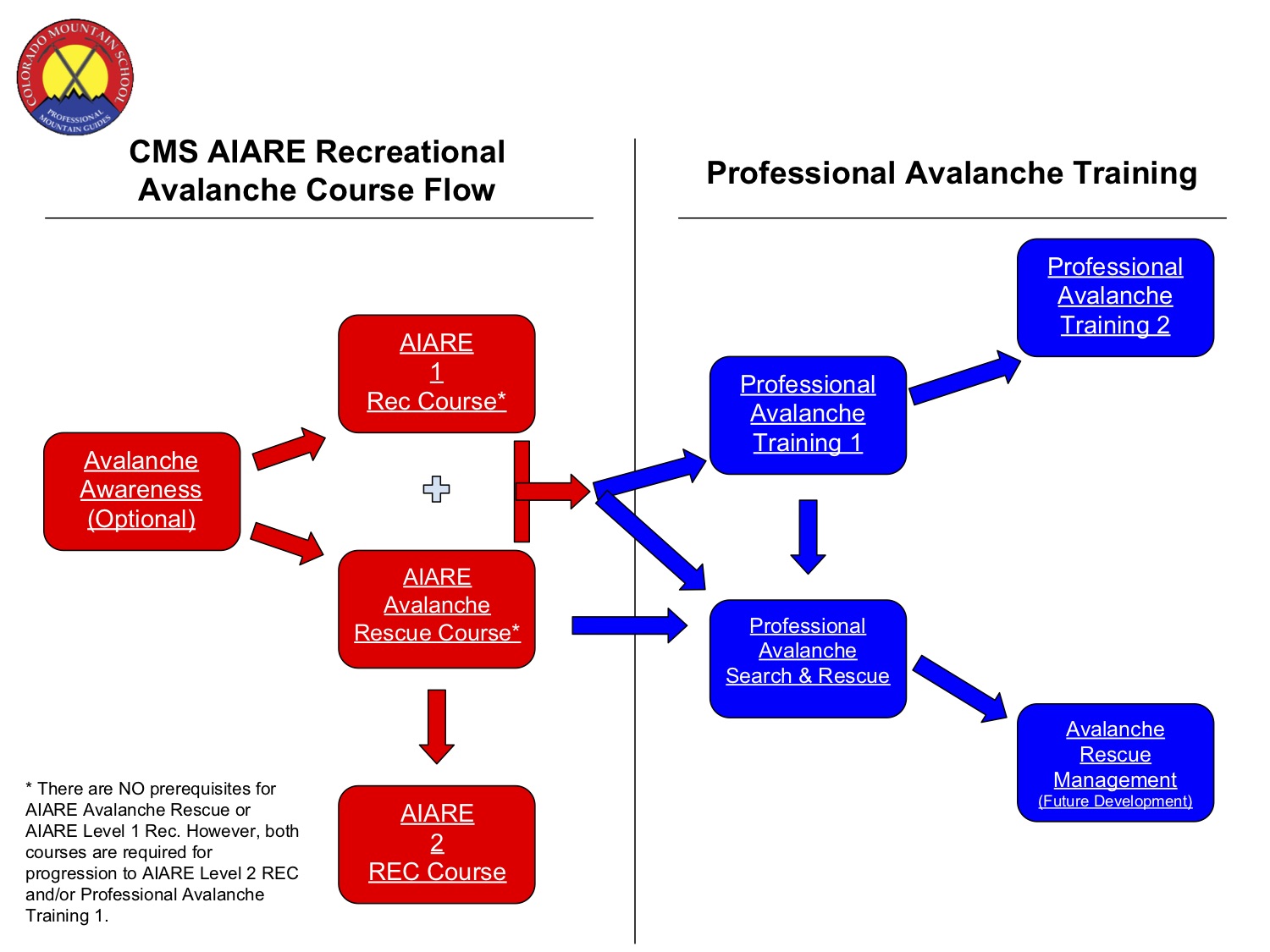 Beginner Backcountry Course: Get the Training

Prior to our program’s backcountry day, Carson and Hargraves led us through the Know Before You Go Avalanche Safety guidelines: Get the Gear, Get the Training, Get the Forecast, Get the Picture, and Get Out of Harms Way. Carson demonstrated how to pack and what to bring. Hargraves gave a presentation on what to wear and how to layer. Everyone double-checked their beacons and shovels. We read the avalanche forecast and weather on the Colorado Avalanche Information Center, and went over our plan for the backcountry day.

“It’s really difficult to understand snow pack—people get PhDs in snow crystals. And, a trigger might not be you or in your control. The sun could change the snow and cause a slide,” Pocock said the morning of our backcountry tour. Our group met at a coffee shop to double-check the weather and avalanche reports, and to reconfirm our day’s plan, before heading to the trailhead.

Throughout the day, our guides queued the group to identify and discuss signs of avalanche activity. We dug a pit to examine the snow layers and practiced using the safety equipment (beacon and probe). The guides also reiterated the responsibility of consistent self-care, in order to maintain energy output: If you or someone in your group is caught in a slide you need to be able to respond quickly. Eat snacks, put on sunscreen, hydrate every 30 minutes to fend off a mental crash, and avoid sweating too much by de-layering. To protect your body (in the event of a slide) put on a jacket, gloves, and helmet before the descent.

Also, if the conditions don’t fall within your threshold of safety, you can always head to the resort or stay home and come back another day.

“Your three lines of defense in the backcountry are your plan; managing your terrain throughout the day; and the equipment—the beacon, shovel, probe. Hopefully you are taking care of the first two, so that you never get to the third. The one thing that you can control tomorrow and 20 years from now is the type of terrain that you can put yourself in that’s safe,” said Pocock.

Avalanche Courses Across the U.S.