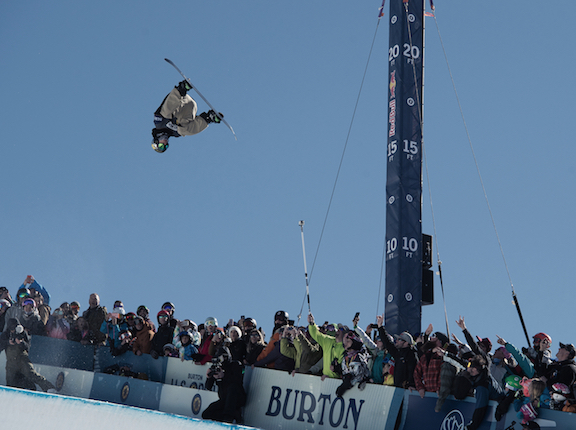 Chloe Kim (USA) is excited to return to the Burton U.S. Open to defend her halfpipe title following her incredible Olympic gold medal showing and said, “The Burton U.S. Open is the best way to end the season and gets me pumped to start the next season. Between the weather and all my friends, I feel like I’m on spring break!”

In addition to Kim, the women’s halfpipe field of 16 pro riders will also include Olympic Silver and Bronze Medalists Jiayu Liu (CHN) and Arielle Gold (USA), as well as the winningest women’s rider in the history of the sport: Kelly Clark (USA). Kim has raised the bar since her 2017 U.S. Open win, adding back-to-back 1080s to her run. Never has women’s halfpipe seen such exciting rapid-fire progression, and next week, thousands of spectators can enjoy snowboarding history-in-the-making for free in Vail.

In men’s halfpipe, the title is up for grabs and there’s a packed field of world class riders gunning for it, including two-time Olympic Halfpipe Silver Medalist Ayumu Hirano (JPN) and 2017 X Games Gold Medalist Scotty James (AUS). They’ll find plenty of competition coming from the likes of Ben Ferguson (USA), Yuto Tatsuka (JPN), Chase Josey (USA) and Danny Davis (USA) among others. The talent in this stacked field of 32 pro riders will be incredible with all the riders bringing their own unique style and skills to the pipe. 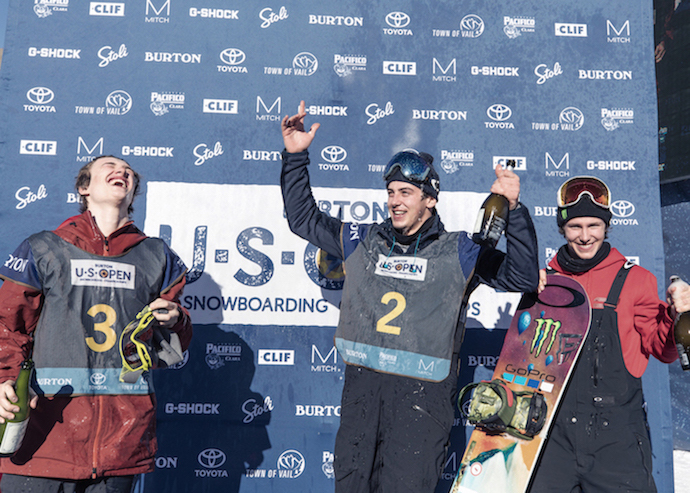 This year’s U.S. Open women’s slopestyle will also be a must-see event as these ladies are no doubt ready to show the world what they’re capable of following disappointing competition conditions at the recent Olympics. Last year at the Open, Olympic Big Air Gold Medalist and returning champion Anna Gasser (AUT) pulled off a major shakeup to win the 2017 U.S. Open women’s slopestyle, putting down what was called the greatest women’s slopestyle run of all time. This year’s Open is sure to see a highly competitive event with top riders like Olympic Slopestyle Gold Medalist Jamie Anderson (USA), Spencer O’Brien (CAN), Julia Marino (USA) and 16-year-old Olympic Big Air Bronze Medalist and U.S. Open rookie Zoi Sadowski-Synnott (NZL) all ready to give Gasser a run for the title.

In men’s slopestyle, Mark McMorris (CAN) returns to defend his U.S. Open title after a tumultuous year involving a life-threatening injury, followed by a heroic recovery to return to the top of competition and an Olympic slopestyle bronze medal. The field of 32 men will include Olympic Slopestyle Gold and Silver Medalists Red Gerard (USA) and Max Parrot (CAN), as well as Olympic Big Air Gold and Silver Medalists Sebastien Toutant (CAN) and Kyle Mack (USA), and 2018 X Games Gold Medalist Marcus Kleveland (NOR). The levels are through the roof in men’s slopestyle, so it’s absolutely anyone’s guess as to what will be thrown down this year.

As far as the schedule goes, the competition kicks off on Tuesday, March 6th with the Burton U.S. Open Junior Jam presented by Clif Bar featuring the world’s top boys and girls under age 15 battling it out in the halfpipe. On Wednesday, March 7th it’s the men’s and women’s slopestyle semi-finals at Vail Mountain’s Golden Peak, followed by men’s and women’s halfpipe semi-finals on Thursday, March 8th. Then, it all comes down to the finals, when 10 men and six women compete for an equal share of the overall $343,000 prize purse in a progression-promoting, three-run format, with slopestyle finals on Friday, March 9th followed by halfpipe finals on Saturday, March 10th.

Spectators are invited to come watch all the exciting competitions for FREE as well as experience free nightly shows on the Solaris Concert stage, plus the new Shakedown Bar Late Night Live Music lineup, as well as the full slate of Burton U.S. Open activities.

For details on all things U.S. Open, follow the hashtag #BurtonUSOpen and head to BurtonUSOpen.com or download the official Burton U.S. Open app on your mobile device now through Google Play and the App Store where you’ll find the full list of invited riders, concerts, product demos, Burton Girls happenings, Kids Learn To Ride opportunities, and the history of the longest-running snowboard event in the world.

The world’s best snowboarders will come together in Vail, Colorado from March 5–10, 2018 to partake in the longest running, premier snowboarding event, the Burton U.S. Open Snowboarding Championships. By day, experience world-class halfpipe and slopestyle competition, then at night keep the momentum high with FREE concerts, events and activities for all ages. A big thanks to the following partners for their support of the 36th edition of the Burton U.S. Open: Burton, Toyota, Town of Vail, Pacifico, Clif Bar & Company, Paul Mitchell, G-Shock, Microsoft Surface, Stoli, Rethink Water, Bose, Jack Daniels, Uber, Boa and Vail Mountain.

If you can’t make it to Vail in person, you can catch all the action online via the live broadcasts at BurtonUSOpen.com. Friday and Saturday finals will be broadcast live on Red Bull TV and locally in the Front Range on TV8, with additional TV broadcasts airing nationally on FS2. Check out the complete broadcast schedule online.

About Vail Mountain…
Under blue skies more than 300 days each year, Vail is an extraordinary mountain resort destination. The vacation experience is exceptional, from the awe-inspiring terrain and natural beauty of the surrounding Gore and Sawatch Ranges to world-class events, activities and festivals, shops and spas, and the abundant culinary experiences and luxurious accommodations that line the pedestrian-friendly streets of Vail Village and Lionshead. Vail is where outdoor pursuits meet village sophistication. Offering more than 5,200 acres of developed ski and snowboard terrain including seven legendary Back Bowls in winter, and flourishing with new summer activities through Epic Discovery, the options for year-round adventure are endless. Coupled with the vision inherent in the spirit of Vail’s founders, and a modern day commitment to excellence in all aspects of guest service and operations, Vail is a mountain resort like nothing on earth.