“Big time writing about small town living; a collection that belongs in every mountain town commode,” says Unofficial Networks…a fitting introduction for one of the most prolific and best-known outdoor adventure authors of our day, Eugene Buchanan, and his lastest work, Tales from a Mountain Town.

In one the best bathroom reads you’ll find west of the Mississippi, Tales From a Mountain Town, features musings from Buchanan’s 25 years of living in the Colorado Rockies, from Boulder to Telluride to Steamboat and adventures and travels all over the Mountain West and the world. 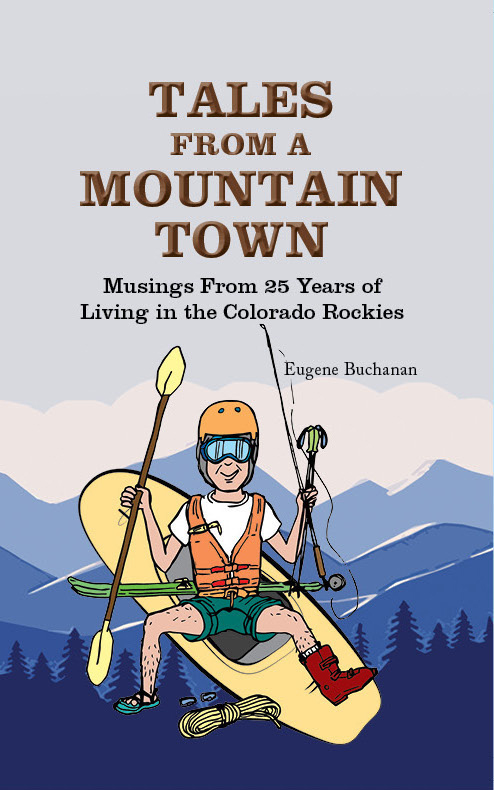 Highlighting the adventures and misadventures of life in a constant outdoor playground, the book compiles both Buchanan’s new stories and popular ones previously printed in a variety of outdoor publications, creating a dynamic, easy-to-read, and lighthearted book. If you “get” mountain town living, and especially if you’ve ever been on an adventure with Buchanan or any of his buddies, you’re going to laugh out loud.

“The book came about pretty naturally,” Buchanan said. “I’ve been writing about and living in the mountain towns of Colorado for nearly 30 years, and this is the compilation of some of the zanier tales.” Basically, Eugene “Eug” Buchanan will try anything. He’s a Class V boater and extreme skier who isn’t afraid of less extreme adventures either, entertaining onlookers or embarrassing his two daughters in the process.

Published by Recreation Publishing, Inc., Tales from a Mountain Town chronicles Buchanan’s two and half decades of living in the Rocky Mountains, with pen and a knack for adventure in tow. Buchanan uses his well-honed prose to paint a picture of the unique situations that arise living and raising a family in the small mountain town of Steamboat Springs, Colo. (pop. 12,000).

From rescuing dogs via canoe to escaping “urban” avalanches and offering “floorspace” to everyone and their brother, Buchanan’s wit and spin on the world around him delivers an easy-to-read collection apropos for mountain town coffee tables and commodes everywhere.

SIA caught up with Eug to learn more about this latest book:

How did you decide which stories to include?
Buchanan: It came about pretty naturally. It’s a hodgepodge of stories, many of which have appeared elsewhere—in such magazines as Outside, Powder, Skiing, Paddler, Elevation Outdoors and others. I just went through them all and decided which ones had that same sort of “mountain town” flavor, capturing the essence of what living here is all about.

Seems like a lot of the stories revolve around skiing?
Buchanan: Well, it is a ski town, after all, and with that comes all the anecdotes you’d expect, from companies’ various “powder clauses” to the annual garage shuffle of sports gear every off-season. Skiing’s a pretty vital component of life up here.

And you moved there for the river community as much as the skiing?
Buchanan: I grew up in Boulder, lived in Telluride for a few years, and then moved to Steamboat in 1992 as the editor of Paddler magazine. We needed a mountain town with a vibrant river community and Steamboat, with the Yampa River flowing through town, fit the bill perfectly. The fact that it has a great ski area was just an added bonus. Steamboat has pretty good everything, all out your back door. You can ski, fish, climb, bike, hike, kayak, sup and more, all during your lunch break. It’s pretty awesome in that regard. It’s also an awesome community of like-minded people who all do the same. It’s pretty easy to find someone to do something with.

What were some of your most significant inspirations for the book?
Buchanan: I always loved Outside magazine writer Tim Cahill’s books like Jaguars Ripped My Flesh and Pecked to Death By Ducks. While not in the same league, these are some of my own misadventures. There are a lot of people living here who inspire me, from bike racers to business owners to mountain climbers. But what they’ll share is the zip code they’ve decided to make their home. Steamboat might not offer the best of any one particular activity (and that’s only if you’re a snob), but it tops the list in having a great community.

The stories are pretty varied…any favorites?
Buchanan: That’s a hard one; they’re all so different, from a freak frozen rainstorm completely wrecking three feet of powder one year to the plight of tearing my ACL and skiing local “dorky” lines. There are still a few patrol at Howelsen Hill downtown who still call me “Urban Sluff” for that “urban” avalanche I was caught in once, which AP picked up and ran all over the country. But the stories aren’t all about getting after it. One’s about our roof somehow getting electrified, and another’s about coaching kids soccer. They’re just the situations you find yourself in in small, mountain town living, encapsulating what it’s like to live here.

Is there still more for you to do as a local?
Buchanan: Oh yeah, quite a bit. I’m actually pretty soft compared to a lot of folks out there. I haven’t climbed as many of the local routes around here as I’d like to, or backpacked enough, or summited enough peaks, or caught big enough fish, or biked far enough, or skied new lines, the list goes on and on. There’s always something else to do here, even after 25 yeas, which is great.

What do you hope readers will learn from the stories?
Buchanan: Hopefully, to take life a little less seriously, to celebrate and laugh at the day-to-day predicaments we find ourselves in, and to appreciate everything we all have living in a great state like Colorado, and especially those of us lucky enough to live in an awesome mountain town like Steamboat Springs. It’s not meant to inspire people to get outside or anything; it’s more to take advantage of everything living here offers, whether it’s enacting the powder clause at work or the ritualistic transferring of garage gear that comes with the changing seasons.

Tales from a Mountain Town is available for order at www.eugenebuchanan.com ($15.99). Retail orders are available at www.ingramspark.com.

–A former editor for the SIA Snow Show Daily and frequent contributor to Powder, Ski, Backcountry and other outdoor magazines, Eugene Buchanan lives in Steamboat Springs, Colorado, with his wife and two daughters. His most recent book, Tales from a Mountain Town, was published by Recreation Publishing Inc in December 2017. Learn more at www.eugenebuchanan.com.