Retail Industry Futurist Among Keynotes at IBD Summit During Interbike

Doug Stephens, one of the world’s foremost retail industry futurists, and David Mead, a lead presenter of world-renowned thought leader and author Simon Sinek’s Start With Why organization, will be joining John Venhuizen, CEO of Ace Hardware Corporation as part of the series each morning of the expo. This new retail education track brings the same type of high-level speaker that the IBD Summit was known for to the Interbike audience at no charge.

As the founder and president of Retail Prophet, Doug Stephens’ intellectual work and thinking have influenced many – from small, brick and mortar community shops, to some of the world’s best-known retailers, agencies and fortune 500 companies. 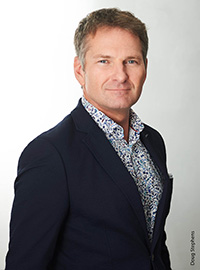 His unique perspectives on retailing, business and consumer behavior have been featured in many of the world’s leading publications and media outlets including: The New York Times, The BBC, Bloomberg Business News, TechCrunch, The Financial Times, The Wall Street Journal and Fast Company.

Drawing on research from his latest book in a session titled, “Reengineering Retail: The Future of Selling in a Post-Digital World,“ Doug will share what creative and courageous brands and retailers are doing today to completely reinvent their stores and their strategies to secure their place in the hearts and minds of tomorrow’s consumer. This session will take place on Wednesday, September 19th at 9:00 am.

David Mead, a specialist in organizational culture and leadership, will be delivering two sessions at the IBD Summit at Interbike. On Wednesday afternoon, David will open with discussion surrounding Simon Sinek’s best-selling book, Start With Why, explaining how great leaders inspire through the way they think, act and communicate.

In the week’s final keynote, “Leaders Eat Last,“ David will offer a follow-up perspective, based in biology, which supports our natural desire as human beings to collaborate. He highlights the importance of the environment we, as leaders, are creating within our organizations. Through examples and stories, David will explain how an environment where people feel safe and feel like their leaders have their back is the foundation for cooperation, innovation, fulfillment at work and long-term progress. David will be sharing this presentation the morning of Thursday, September 20th.

“These keynote speakers at The IBD Summit at Interbike bring a valuable message that retailers will be able learn and benefit from“ said Justin Gottlieb, Interbike Interim Show Director. “Doug’s knowledge as one of the world’s leading experts on all aspects of retail and David’s ability to convey a meaningful and practical message around leadership and purpose, will ensure that the take-aways from these keynotes will be invaluable for all attendees.“

As announced previously, John Venhuizen, CEO of Ace Hardware Corporation will be delivering a keynote entitled, “The Battle for Relevance: How Brick and Mortar Businesses Can Win the Battle for Relevance and Consumer Preference.“ In this presentation, on the morning of Tuesday September 18th, John will share how his 5,000+ independent store owners compete and win against some of the biggest, best and well-funded companies on the planet.

More information on these sessions including the education schedule to-date can be found on the Interbike website.

Interbike Marketweek will take place in the Reno Tahoe region beginning with the Northstar Free-Ride Festival in North Lake Tahoe, CA, September 14-16, 2018 (with bike demos taking place on September 15-16). OutDoor Demo will run from September 16-17, 2018 for members of the trade, followed by the Interbike Expo in Reno, NV on September 18-20, 2018.

Interbike is owned by Emerald Expositions, a leading operator of business-to-business trade shows in the United States. The company currently operates more than 55 trade shows, as well as numerous other face-to-face events. In 2017, Emerald’s events connected over 500,000 global attendees and exhibitors and occupied more than 6.9 million NSF of exhibition space.