The World Travel and Tourism Council’s annual Economic Impact Research released this week shows that “Travel & Tourism” was responsible for the creation of 7 million new jobs worldwide. The report also shows that 2017 was a bumper year for the global Travel & Tourism sector, which grew at 4.6%, much faster than the economy as a whole (3% growth during 2017, according to the group).

Gloria Guevara, WTTC President & CEO said, “Travel & Tourism creates jobs, drives economic growth and helps build better societies. Our research shows that our sector was responsible for the creation of one in five of all jobs globally. In the last few years, Governments around the world are realizing the extraordinary benefits of tourism and I congratulate them for taking steps to maximize the potential of our sector.” 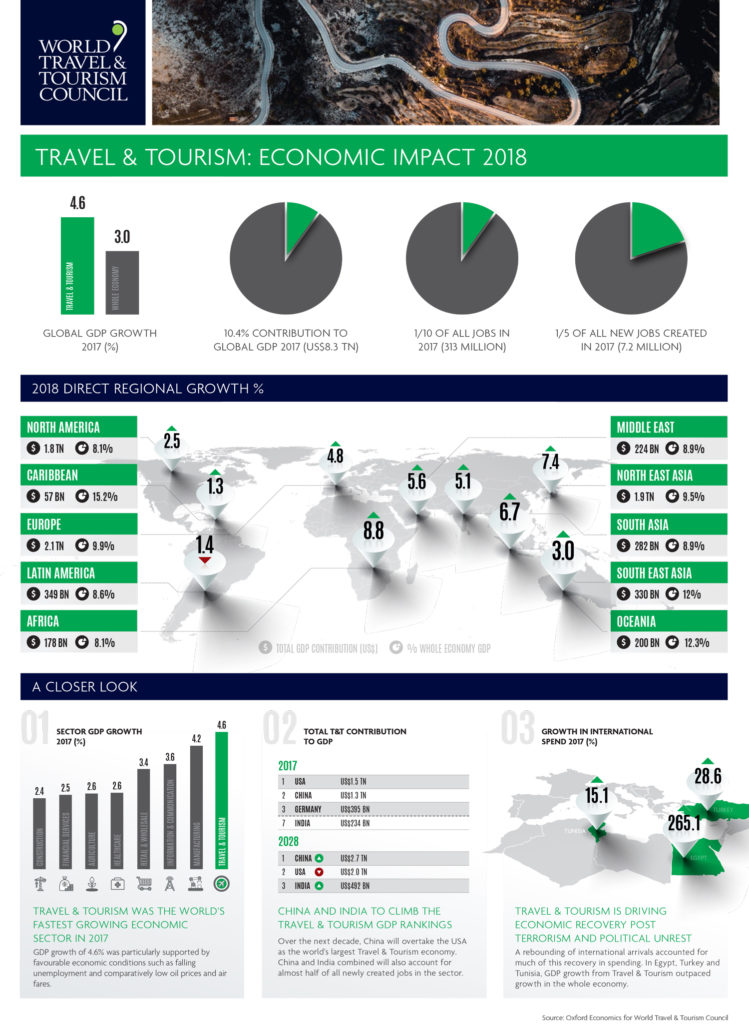 For the seventh consecutive year, the Travel & Tourism sector has outperformed the global economy and in 2017 was the fastest growing broad economic sector globally, showing stronger growth than all sectors including manufacturing (4.2%), retail and wholesale (3.4%), agriculture, forestry and fisheries (2.6%) and financial services (2.5%).

In 2017, Travel & Tourism’s direct, indirect and induced impact accounted for:

Guevara continued, “2017 was the best year on record for the Travel & Tourism sector. We have seen increased spending as a result of growing consumer confidence, both domestically and internationally, recovery in markets in North Africa and Europe previously impacted by terrorism and continued outbound growth from China and India. This is great news for the millions of people who depend on our sector for their livelihoods.”

Highlights from around the world include:

– Europe’s performance was better than previously expected with 4.8% growth as long-haul demand (dampened in 2016 by terrorism concerns) recovered strongly, accompanied by strong intra-regional travel thanks to the strength of the European economy. In 2017, European airlines recorded passenger growth of 8.1% and over 1 billion passengers for the first time.

– Travel & Tourism’s contribution to GDP in North Africa grew by 22.6% in 2017, showing a strong rebound from the impacts of terrorism in previous years. Stellar performance from Egypt (72.9%) and solid growth in Tunisia (7.6%) inspire confidence in the region as tourism activity continues to recover to pre-attack levels.

– Asian countries continue to drive global tourism growth with North East Asia growing at 7.4% and South East Asia at 6.7%. China continues to lead the way at 9.8%. Over the next ten years over one third of absolute GDP growth and nearly half of employment growth will be generated by China and India.

– Latin America showed a decline of 1.4% in tourism GDP, largely a result of a contraction in international spend to the largest Latin American economy, Brazil, of 18.1% compared to 2016, and compounded by the ongoing political and economic problems in Venezuela.

Forecasts for 2018 suggest that growth will continue, albeit at a slower rate than in 2017 as a result of higher oil prices.

Guevara added “As our sector continues to become more important both as a generator of GDP and jobs, our key challenge will be ensuring this growth is sustainable and inclusive. Already in 2017, we have begun to see a backlash against tourism in some key destinations. Going forward we need to ensure that growth is planned for, well managed and includes partnerships between not only the public and private sectors but also includes communities themselves. There is a huge opportunity for governments to capitalise on the opportunities Travel & Tourism brings to create new jobs, especially in those economies where many jobs are threatened by new technologies. WTTC looks forward to partnering with governments around the world to ensure benefits for all.”

Overcrowding and the future of tourism jobs will be key topics covered at the upcoming WTTC Global Summit in Buenos Aires, Argentina on 18-19 April 2018. The event will be livestreamed in full – see www.wttc.org for more details.

WTTC’s Economic Impact Research is the only global dataset on the economic impact of Travel & Tourism, covering 185 countries and 20 regional groupings, accessed at www.wttc.org.